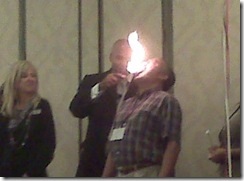 October’s Texas Foster Family Association (TFFA) Training Conference, “The Magic of Foster Parents,” was a rousing success, according to all who attended. Three full days of training were offered to parents and agency staff. Eric Anderson, professional magician, gave the keynote address called “The Magic of Attitude.” Speaking with parents, he discussed how learning magic helped him stay on track while he aged out of the foster care system. You can see Anderson talk about foster care through his magic with TFFA president and LSS VP of Advocacy, Irene Clements, on this YouTube Video.

During the awards banquet, Anderson rolled back his sleeves and got down to some serious magic. He performed incredible card tricks, did some over-the-telephone magic, and even had foster parents join in on some of his act. And that’s when it happened … One of our LSS foster parents, Gil Leija—he and his wife, Angela were nominees for the “Foster Parents of the Year Award”—showed he was a man of true courage. No one is sure if it was prompted by the pecan pie he ate for dessert, the sheer excitement of finally having a night out on the town, or if his wool was steeled from the years of excellent foster parenting he has under his belt, but whatever the reason, when Anderson asked for volunteers to eat fire with him, Gil proudly stood up and courageously walked toward the stage. As if hypnotized, and completely ignoring his wife Angela’s desperate pleas to “Sit down at once!” Leija found himself staring eye-to-eye with Anderson who was demonstrating how to safely eat fire.

The unflappable Leija bent his head back, closed his eyes and, as we all watched in amazement, Anderson forced the flaming torch into his open mouth. Cheers erupted for Leija when he made his way back to his seat, grinning faintly as he thought of how his kids were never going to believe him when he told them the story. A relieved Angela was there at the table to greet him as she was hanging up her cell phone with their insurance provider to see if they were covered for fire-eating.

Lancelot hugged his Guinevere and became a hero for the evening. And so it is with all our foster parents: You may not be eating fire, but you are demonstrating your courage and resilience every time you take a child in need into your care. Perhaps we can all take a page out of Gil’s book and boldly walk up to the stage to perform a bit of magic when we are asked to.