Shattering The Illusion: A Magician’s Guide
To Making Racism Disappear

WHY WE WROTE THIS
Racism may be the topic du jour, but for Black Americans it has long been a fact of life. In this essay, Black magician Eric Anderson exposes racism for what it is: an illusion built on false assumptions. 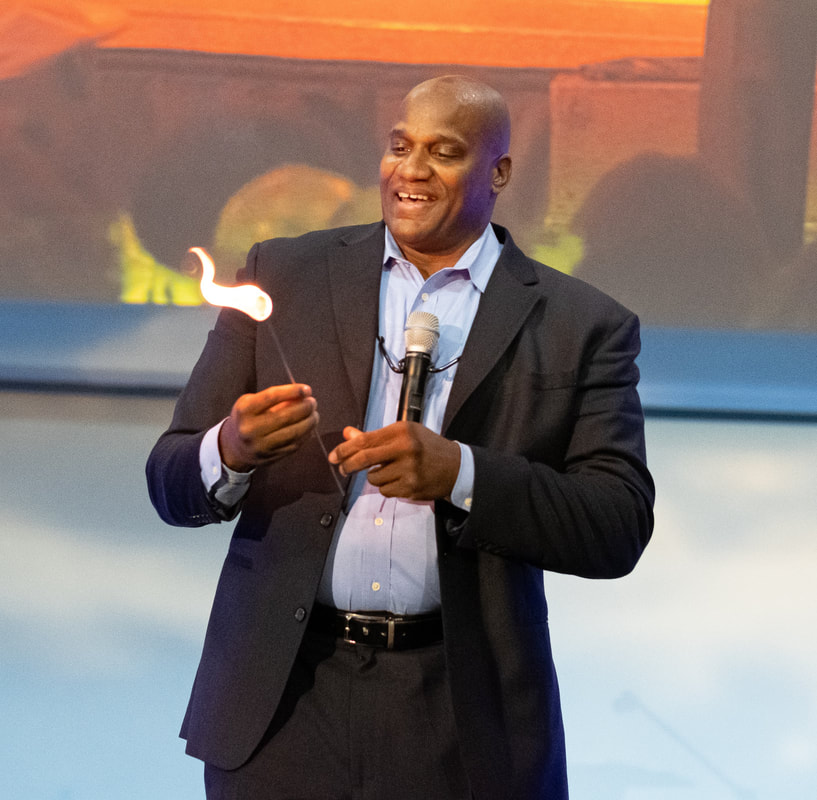 Courtesy of Eric Anderson Magician Eric Anderson performs a fire-eating act during his “Magician With a Message” show, Oct. 12, 2019, in Atlanta.June 29, 2020
​As a magician, Eric Anderson has made a career out of embracing illusions. But as a Black American, one particularly unwelcome illusion has followed him as he has traveled the United States and the world: the false assumption that Black people are inferior and unworthy of humanity (or humane treatment). This is his story, as told to Chandra Thomas Whitfield.

I remember it like yesterday, even though it was 16 years ago. I’d just taken my last bow at my performance at a private corporate event in Cheyenne, Wyoming. As I stepped off the stage, audience members collectively jumped to their feet, a clear show of support for my inspirational “Magic of Attitude” presentations that I regularly deliver across the globe. After all, I am known as “the magician with a message.”
A crowd quickly formed around me. As I shook hands and answered questions, a white guy, about my age, casually handed me back one of the props I’d used in the show. Even with everything going on, I noticed he’d eventually begun standing off to the side; a smirk spread across his face. I remembered thinking to myself that he’d seemed to be waiting for something, but I was too busy at the time to think about it or care.

About these adsIt would be 30 minutes later, once back at my hotel room, that everything would finally make sense. A chill shot down my spine as I unpacked my show bag and realized that the smug man had taken the rope I’d used in my show and tied it into a hangman’s noose. It was clear he’d hoped I’d discovered his obvious act of intimidation in his presence; I was glad I hadn’t delivered any of the satisfaction he’d craved. Still, it freaked me out enough to pack up my things and spend the night at the airport instead. Better safe than sorry.

That’s one of many instances of overt racism that I’ve experienced traveling the United States and the world delivering my messages of empowerment mixed with magic performances. I had no idea back then that my life’s work, being a master illusionist, would ultimately endow me with some invaluable insight into the roots of America’s perpetual problems with race and racism. My craft, interestingly, has also inspired my ideas about a practical first step to begin addressing the issue as well.
Monday Sunrise Briefing: New US surges and shutdownsMany people assume that being an accomplished author, speaker, and performer who has shared the stage with everyone from Hank Aaron and Jeff Foxworthy to former first lady Laura Bush and former President Jimmy Carter somehow insulates me from the realities of racism in American society; they are dead wrong. 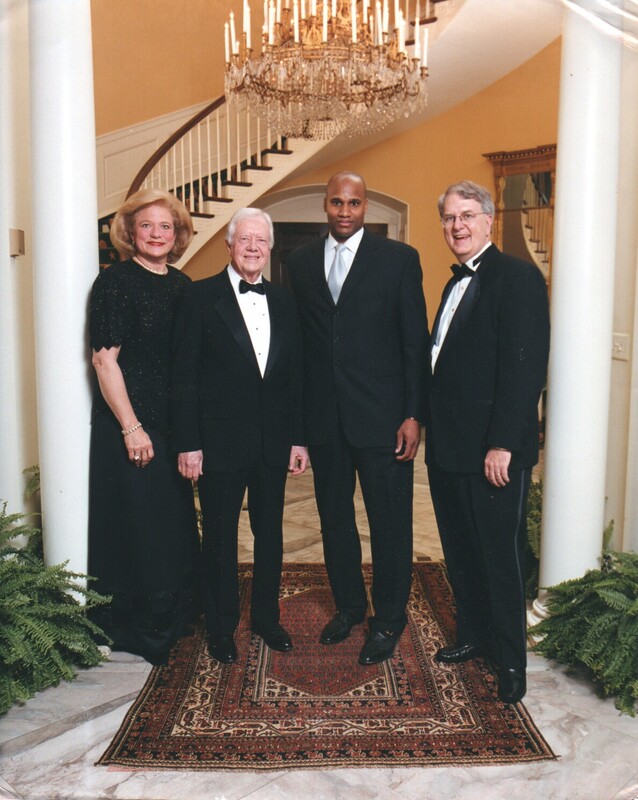 Courtesy of Eric Anderson Eric Anderson (2nd from right) poses with former President Jimmy Carter, former Georgia Gov. Roy Barnes (right), and Mr. Barnes' wife, Marie Dobbs Barnes, during the 2001 Legislative Appreciation Dinner held at the Governor’s Mansion in Atlanta.
The incidents are far too frequent to count. There was the time when I asked two men in a convenience store parking lot for directions to a country club where I was performing and one leaned to the other and said without hesitation, “I didn’t know they let ‘n-words’ in there.”

And the time a wealthy white client nearly snatched a check out of my hand after learning that I was not just an employee, but the owner of the agency he had hired.

What I see today is not much different from what I experienced growing up in Southern California, to many a so-called bastion of white liberalism. As a teenager growing up in San Diego, it was not uncommon for me to be stopped by the police, harassed, handcuffed, and slammed to the ground for absolutely no reason.

Once after high school, while working as a janitor a producer from a local television station approached out of the blue, asking me to play “the suspect” in a reenactment of a crime they were recording for a news segment. I politely declined and was furious to learn the next day that he knew – and had always known – that the perpetrator was a white man.

These crazy times we’re facing lately in the wake of George Floyd’s death at the hand of rogue Minneapolis cops, have stirred up old feelings of regret about a conversation I had with a Black friend during my time in the U.S. Air Force. He’d tearfully confided that someone had called him the n-word for the first time. My response: “What’s the big deal, man? Do you know how many times that has happened to me?” I wish I’d been more compassionate.

I realized much later that I’d become so numb to discriminatory treatment, that I’d completely detached myself from all of the anguish that it imposes, including how I felt the first time – and every time since – I’d been called that vile word, starting as a young child.

It wasn’t until 1993 when I purchased a one-way bus ticket to what would become my permanent home of Atlanta, aka “the Black Mecca,” to pursue my magic career full time that I realized all of the anger and shame I had been suppressing inside.

It was eye-opening and awe-inspiring to see so many Black folks in leadership and doing well for themselves. Seeing that helped me begin the process of dismantling the negative feelings I’d internalized about myself as a Black man and my fellow Black people in general.

So, as I reflect on the unrest unfolding now in the country in the wake of Mr. Floyd’s death and other victims of police brutality and systemic racism, I find myself angry and stunned that this keeps happening. I’ve had to turn to magic – my trade, my passion, and something I love – for insight and understanding. The parallels, interestingly, are more obvious than most realize.

You see, magic in so many ways is built upon the power of assumptions – false assumptions. If I, as a performer can get the audience to make an incorrect assumption about what is actually happening right before their eyes, it becomes that much easier for me to pull off my illusion.

Similarly, racism is also built upon false assumptions that Black people are inferior, criminals, deceptive, unintelligent, guilty, and unworthy of compassion or humane treatment. And those who say they don’t see how that line of thinking plays out in our society, don’t because they simply don’t want to. They are committed to holding on to those false assumptions. Yes, holding on to another type of illusion.

If America is to ever overcome the perennial pandemic of racism, its citizens – everyone from everyday people to the powers that be – must make it a priority to begin obliterating those bogus assumptions and the dehumanizing false narratives about Black people that have been ingrained in most of us from day one.

When we commit to doing that, then – and then only – can we hope to see racism finally begin to disappear from our society.
​
Chandra Thomas Whitfield is an award-winning multimedia journalist and a 2019-20 fellow with the Leonard C. Goodman Institute for Investigative Reporting. She is the host and producer of “In The Gap,” a forthcoming podcast for In These Times Magazine about how the gender pay gap adversely impacts the lives of Black women in the American workforce. ​